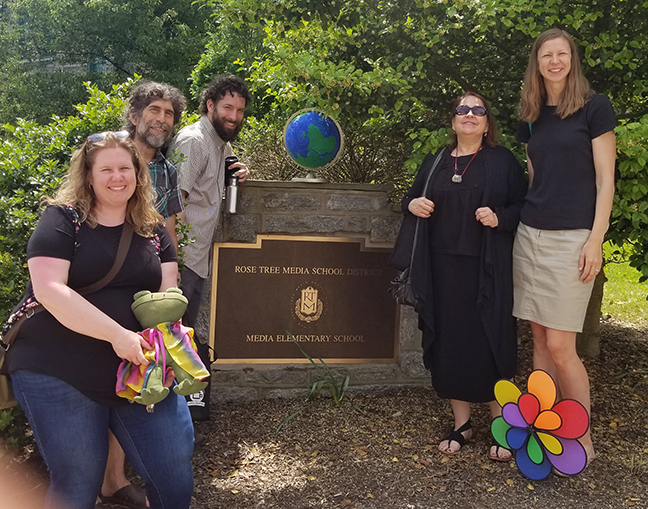 Many of us can remember the final few weeks of school before the summer break… the anticipation and all of that pent-up summer energy just waiting to be released! Five members of the Media Fair Trade Committee ventured into this enlivened atmosphere to facilitate experiential role plays with four classes of 4th graders at Media Elementary School in late May and early June.

Media Elementary became a Fair Trade School in 2014 and welcomes this annual introduction to the Fair Trade concept through an experientially rich, interactive role play, in which students are introduced to the origins and production of chocolate and the real-world circumstances that many cacao growing communities face.

Following a look at the geography and processing of cacao (including the chance to check out real cacao pods and beans!), each class was broken up into three separate ‘cacao farming communities’ one of which was a Fair Trade group that received a guaranteed price and a Premium in the previous season. Each group was given a bank loan and had to budget their money to make it through the season, sell their beans to pay back the loan, and (hopefully) have some left over for any needs and upgrades. During the season, both positive and negative scenarios unfolded, including a rainstorm, a helpful visiting family member, a mudslide, neighbors sharing tools, or broken equipment, among other things. But, the Fair Trade growing community had extra money from the Fair Trade Premium earned in the previous season and were able to purchase a roof for their drying beans to protect them from the rainstorm, avoiding the mold that plagued the other two groups and earning top dollar for their beans.

One of the more moving  scenarios occurred when one of the Fair Trade groups in a class spontaneously decided to lend money to another group that had suffered loss in order for them to be able to pay back their loan. This was a compassionate act that spoke volumes for the students of Media Elementary and their burgeoning awareness.

Fair Trade can be a serious subject, understanding that, in many cases, there is unfairness involved in the labor of producing many everyday items that we often take for granted (like chocolate!). The Fair Trade role play experience presented a fun and interactive way to learn about the realities, while also helping to diffuse some of the pent up energy brought on by the pending summer months!

Thank you, Media Elementary, for welcoming us into your classrooms and Happy Summer to all!

If you’re interested in learning more about Fair Trade and the Media Fair Trade Committee, check out our website and like/follow us on Facebook and Instagram! We’re always looking for like-minded folks to join us!!