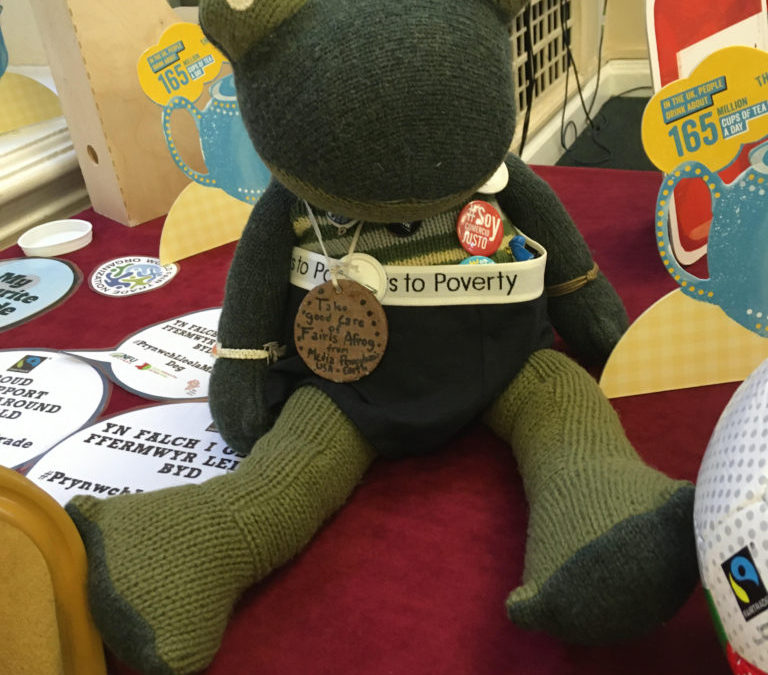 Last month, Ira and Emily of Media’s Fair Trade Town Committee went to Cardiff, Wales for this annual conference. In addition to the wonderful, amazing folks doing fair trade work around the world, they were wowed by the beautiful countryside complete with grazing sheep and lots of hedgerows and castles, and the warm people and culture.

Wales is the first Fair Trade country and it was evident that they are very committed to this way of addressing poverty in the global south. We dined in their modern “green” senate building which is located in a part of town with a very old port where the River Taff flows into Cardiff Bay.
They have also passed the Future Generations Act which make the UN Sustainability Goals law for them. And at the same time Extinction Rebellion protestors were being arrested in the UK, and the government was trying to figure out ways to outlaw their protests, Wales was inviting their members in for dialog!

We also got to see the great number of Fair Trade products the Cardiff government uses in their cafeteria and their commitment to reducing plastic and food waste, and focus on healthy and local food offerings.

Their were lots of lectures by local officials and activists, and collaborative hands on workshops to inspire us and impart new tools to do our Fair Trade work back home. Emily was disappointed to learn that although the Fair Trade system helps to raise family farmers out of extreme poverty, they are still not earning a living wage. And as in previous conferences the connection between Fair Trade and climate change was made in that producers in the global south are the first ones to suffer the negative effects, and that by allowing them to live decently on their farms, stops corporate industrial agriculture from moving in and cutting down carbon eating rain forest.

In addition to making great new friends, we got to connect with some old ones, the most important being Fairis Afrog, Media’s globe trotting Fair Trade mascot who has been residing all year in Cardiff and will now move on to Quito, Ecuador, where the next conference will take place. Keep up the good work all you Fair Traders and see you in 2020!